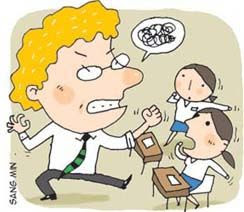 Harvard professor Dr. Richard Elmore argues that the leadership practices of an organization trickle down; they are reproduced in the individual learning organisms of that organization (Elmore, 2011).  In other words, leadership practices will be replicated within an organization.
I have found this true for KIPP, for better and for worse.  KIPP’s espoused ideals are admirable, and I saw significant evidence that they were reproduced amongst teachers and leaders in the national network of charter schools.  However, there is one specific leadership practice at KIPP that I have also seen reproduced in the organization, and this particular practice – I argue – acts in direct opposition to KIPP’s espoused goal of student achievement.  Namely, the practice I am referring to is publicly humiliating students and personnel, specifically in the form of yelling in anger.
In Jay Mathews book Work Hard. Be Nice, Mathews cites numerous examples of Dave Levin and Mike Feinberg publicly humiliating and shaming students and teachers, sometimes by yelling at them in anger (pages 172, 174, 202, 234-239).  According to Mathew’s book, Levin and Feinberg – founders of the KIPP organization – argue that public shaming can help create a safe classroom environment because it sends a strong message to bullies.  Consequently, Levin and Feinberg instituted public shaming practices such as separate seating during class and lunches – which they called ‘the porch’ – and or a stern reproach in the form of yelling at or taunting students in anger in front of peers.  Such practices have been replicated amongst other leaders within the organization; I have seen these practices occur many times, and I have participated in these practices myself, not fully understanding the implications thereof.  Furthermore I have heard stories, which I hope are not true, from other KIPP teachers of leaders at various KIPP schools engaging in these practices to a degree that is discomforting.
Since the relationships between teachers and students impacts student achievement (Hattie, 2009), I assume that yelling at students in anger then has negative impact on student achievement.  Research printed in the Journal of Educational Research confirms this argument; it suggests that practices of aggressive teacher management – i.e. yelling at students in anger and public humiliation – lead to low student performance, student distraction, and high levels of negative feelings towards teachers. (Romi, et al 2011). Specifically, the article highlights the “…negative impact of teacher aggression, which includes the use of such techniques as yelling in anger at students, using sarcasm or belittling comments to humiliate students, and the use of group punishment for the misbehavior of a few.”  These forms of teacher misbehavior lead to students having negative feelings towards their studies.
In closing, I recommend that the KIPP organization train leaders in ‘lighter’ behavior management strategies that can be used in interactions with personnel and students: practices that will positively impact school culture and student performance.  Such strategies can be found in the book Teaching with Love & Logic, and the research of Woolfolk-Hoy & Heinstein (2006).  According to Woolfolk-Hoy & Heinstein, students respect teachers who use humor and ‘light touches’ to refocus students instead of teachers who publicly humiliate.  Also, according to Romi, Lewis, Roache, and Riley, teachers who use discussion, hinting, and involvement in behavioral punishments lead to higher beliefs that disciplinary measures was deserved.
These forms of teacher/leader misbehavior are not unique to KIPP.  In fact, today I witnessed a teacher yelling at a student in anger in a public school in Boston.  However, this practice was quantitatively more frequent at KIPP than at any other school I have been a part of, and I think the effects of this practice deserve further research, specifically in ‘no-excuses’ charter schools.

I'm glad you have not seen as much yelling in non KIPP schools, BUT that makes me think that you have an unrealistically positive image of what "most schools" look like. It's dismal out there and I have seen far more yelling and shaming than not ----in public, charter, private, progressive, conservative, religious schools.

I have no point. I just want to gripe about/ lament this heartbreaking reality in a place where I'm not infusing negativity into a school.